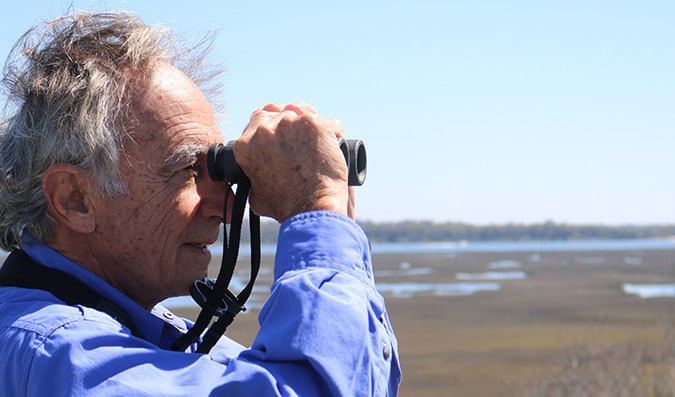 story & photos by CHLOE EMORY
The only thing larger than Jim Kern’s fascination with nature is his desire to see the Florida Trail completed. 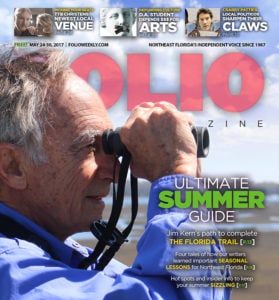 In 1961, on a miserable, rainy day in the Great Smoky Mountains, Kern took a life-changing hike with his little brother. Along the way, he asked himself, “Is there any long trail in Florida?”

Thus began the story of what would be Kern’s mission in life for many years to come.

Kern’s passion for wildlife and photography started at age 11, when he saw his first rose-breasted grosbeak.

Now 83 years old, Kern describes himself several ways throughout the intervening 70-plus years: first, a wildlife photographer, second, a naturalist with a camera and, finally, an adventurer with a camera.

“There’s not a big difference between those three, but there is to me … I just have a heavy dose of adrenaline, you know, I think an adventure is a big part of it,” says Kern.

His sense of adventure took him many places: to Indonesia, to photograph komodo dragons, to a small mangrove island in the Florida Keys to capture a family of bald eagles on film, to Brunei Bay Area in Borneo, where he photographed the proboscis monkey, and many, many more.
However, the one thing Kern always found himself coming back to was his idea to complete a long, continuous footpath, beginning and ending within the state of Florida.

Kern had been a Floridian for only three or four years at the time he and his brother hiked along the Appalachian Trail in the Smokies. After that hike, he was eager to get back to Florida and figure out if the footpath he envisioned existed. He learned that there was no continuous footpath of the magnitude he sought, and he developed a vision for the trail from that small beginning.

“I thought, ‘Shoot, everybody lives on the coast,’” Kern said, “This thing’s going to have to go up through the center of the wilder parts of the state and at least as far as Tallahassee.”
Kern was distracted from this plan for about five years, but eventually came back to it, founding the Florida Trail Association, a nonprofit group of volunteers who like to hike and work to maintain the trail for everybody. In 1966, the group helped create the first orange blaze marking the trail in the Ocala National Forest.

“We had 70 members,” Kern said, “We had a route laid out. I would assign a section to see if they could find a route from here to here, or there to there.”
____________________
It’s a little more than 50 years after they established that first trail marker and, for the most part, the trail follows the route Kern envisioned. 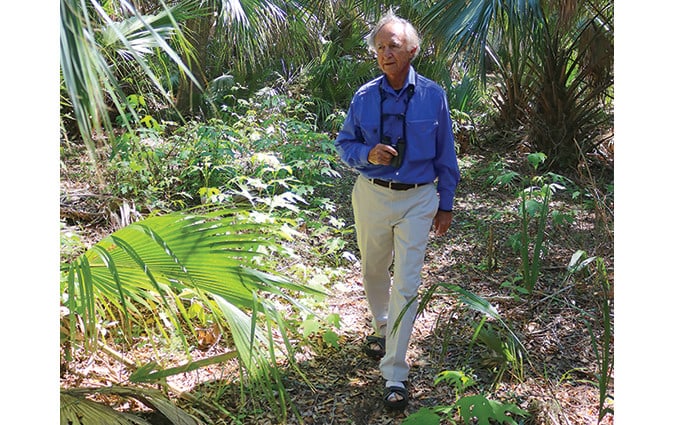 Kern founded the Florida Trail Association, a nonprofit group of volunteers who maintain the trail, in the 1960s.

The original plan was for the trail to be between 1,300 to 1,400 miles long. Currently, there are approximately 1,000 miles of foot-trail for anyone who wants to go out and hike for an hour, a day, a week or more. But there is work yet to be done to fulfill Kern’s vision.

“Now, we’ve picked the ripe fruit,” said Kern, “but we have 300 miles that we’re struggling with to close the gaps. That’s the problem.”

If you were to walk the Florida Trail, you would experience roughly 300 miles of what Kern calls “road walks”—areas you must traverse hiking on paved roads. Kern says it’s dangerous to hike on roads also used by motorists, and not what he had in mind for the trail.

“We’re at a point now where we need to really make this issue known to people.”

“They went to Congress at just the right time,” said Kern. “And in 1968, Congress passed the National Trails System Act.”

Around two-thirds of the 2,200-mile trail was on public land. The act declared that Congress would get involved and acquire the missing gaps in the trail.

“There’s no other trail like this in America,” he continued. “You can hike from Springer Mountain, Georgia to Maine and there won’t be anyone telling you to get off of his or her land.”

“It’s rather frustrating for hikers,” Kern said, “Just like it would be frustrating for a guy in a semi-tractor trailer to start for LA on I-10 and the road were to just cut out.”

In 1978, Congress held hearings to go over the National Trails System Act; members weren’t happy with the way it was being implemented. By then, Kern had been the president of the Florida Trail Association for 10 years.

Kern was one of the people asked to speak on behalf of trails for America. He got to know a few other folks at the hearing, and together, they founded the American Hiking Society.

Kern later left the Florida Trail Association to be president of the American Hiking Society. It wouldn’t be the last organization in which Kern would be involved, however.

“In 1989, I got thinking seriously about disadvantaged kids and how to get them on the trails … and I founded something called Big City Mountaineers,” said Kern.

The American Hiking Society is now based in Bellevue, Washington and Big City Mountaineers has a program based in Golden, Colorado. Kern was the president of BCM for about six or seven years.

____________________
Though Kern founded many hiking organizations, including Hiking Trails for America, he kept coming back to his dream of closing the gaps in the Florida Trail. This is, essentially, still Kern’s mission. 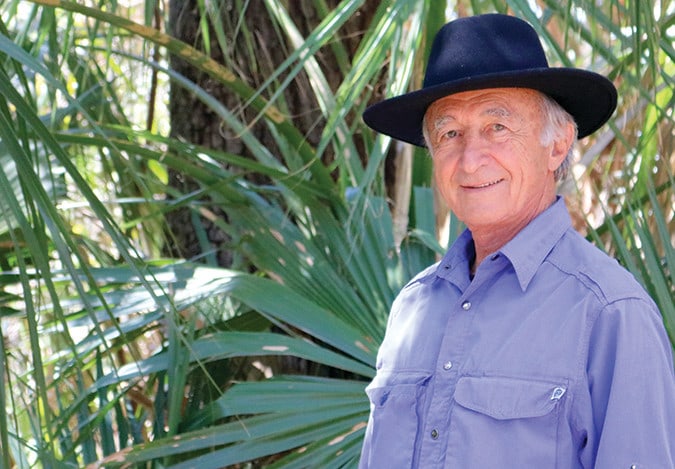 “I’m bothered by the fact that the Florida Trail, which I founded, is not continuous,” said Kern.

The Florida Trail is not maintained by the state but, rather, by volunteers. They spend thousands of hours grooming the trails, cutting down vines and branches that grow during the summer and otherwise keeping the walking paths clear.

Amy Koebrick, one of Kern’s associates, is actively trying to spread the word about closing the gaps in the Florida Trail by focusing on passionate hikers who realize what a problem these “road walks” are and how dangerous they can be for hikers, when both people and cars are traveling on the pavement. “It’s a part of their lives,” explained Koebrick. “They use social media and they help each other out. It’s really interesting, the networking they do, so we’re trying to jump into that.”

Their main target audience is Millennials. The group is divided fairly evenly, about half-male and half-female.

“That’s the people we’re speaking to,” Koebrick said, “We found that out organically. We’re trying to capture their energy.”

Kern has a petition to close the gaps in the Florida Trail, and it needs one million signatures. Once he gets the one million, he can take the process to the next level.

“A lot of them know Jim. They are suddenly humbled because he’s a legend in hiking. They hope that he can get this done and they want to know what they can do,” said Koebrick.

Unlike the Appalachian Trail, which crosses many states, the Florida Trail begins and ends within the state of Florida, which makes it a little trickier to get Congress involved, as it’s essentially a state issue. However, Jim Kern is determined to find a way.

“They took 30 years to do this for the AT,” said Kern. “We’re flexible. We just want to know that eventually, in time, it will be a continuous footpath with a scenic view for the hiker.”
This is an idea Kern has been examining since 1961, something he has been working toward since that time. And he’s not giving up on it anytime soon.