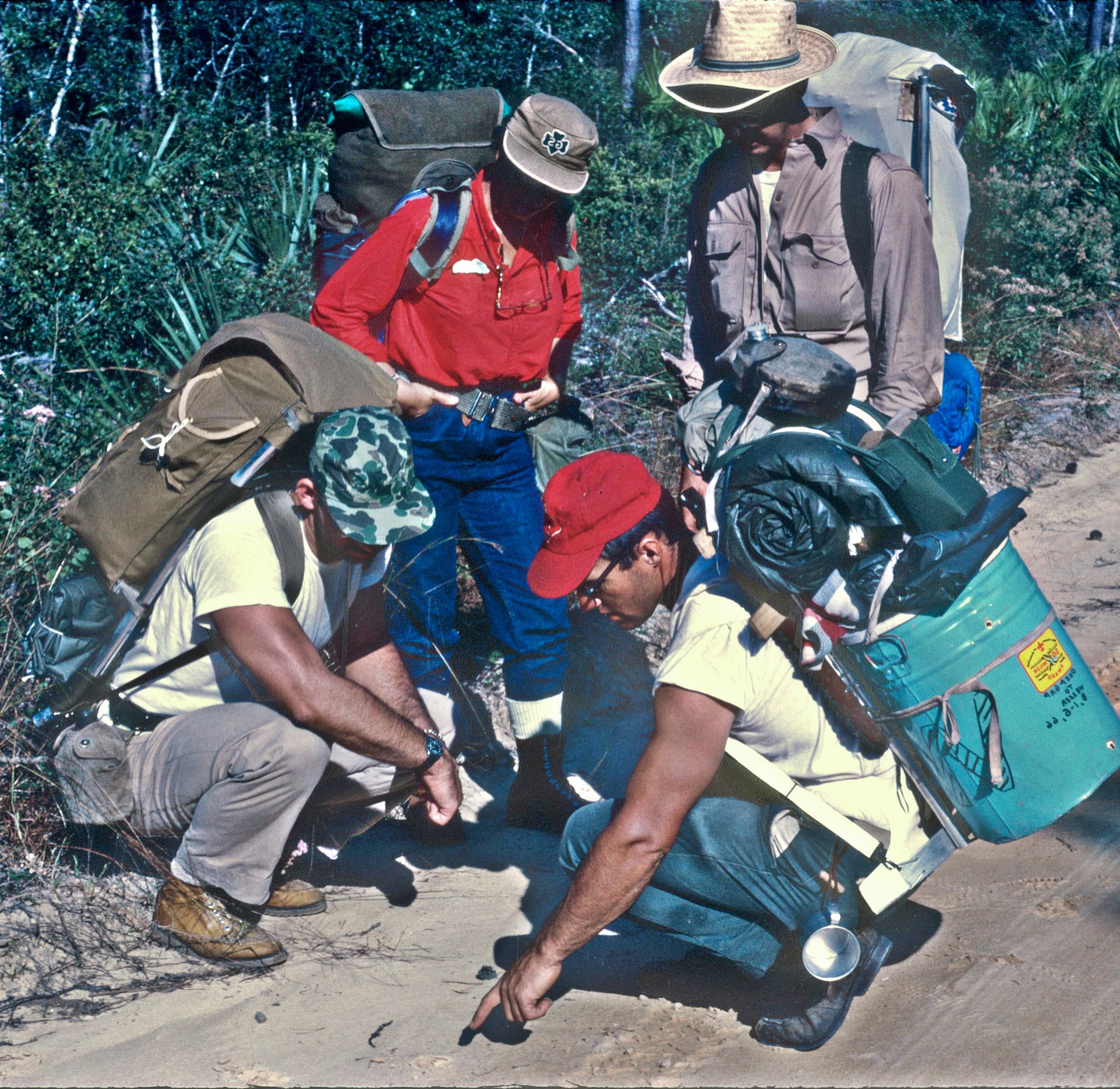 This picture, although seemingly simple in nature, tells an amazing story of the first hike in the Ocala National Forest that led the way to forming the Florida National Scenic Trail. Here’s the story behind the photo.

In early 1966 Jim Kern was living in South Florida. He spent any spare time he had hiking through the preserves and along the dikes in the area, sometimes taking hikes that lasted as long as 12 days. It was these adventures that gained him the press he desired. The Miami-Herald published an article about his quest for a Florida Trail route and interest grew exponentially. Jim began to receive correspondence from not only people in the South Florida area who received the Herald, but also from other cities throughout Florida. People were spreading the word.

By this time Jim had formed the Florida Trail Association. Within months after the article debuted, he gained roughly 70 dues-paying members. FTA members received membership cards and a one-page quarterly newsletter. This newsletter would push the creation of the Florida Trail and would advise the members of upcoming hikes.

It was Jim’s idea that the Florida Trail should go through the middle of the state, bringing people from the coasts to the more remote areas. One glance at the Florida map and you see there are these three large national forests: Ocala, Osceola and Apalachicola. A decision to include these forests set the route for much of the trail.

So, in November 1966, Jim met four new members (pictured above) from his Florida Trail Association at Clearwater Campground (close to the southeast corner of the Ocala National Forest). They parked their cars and grabbed their gear. They planned to spend the next three days hiking 26 miles to Juniper Springs. Armed only with orange spray paint to mark their way and a compass to guide them north and northwest, they began the “orange blaze”.

Once this trail was officially mapped, hikers and nature lovers alike began to swarm to the area, looking to complete the 26 mile trail. The U.S. Forest Service, who at one time told Jim “No one wants to hike in Florida”, could no longer deny the draw that something like this had. Today a historical marker stands at the starting point of that adventure in 1966. Although many paths along the trail have been altered over the years, this original path still exists.

The photo above shows four of Jim’s companions near Clearwater Campground to Juniper Springs in November of 1966. The group checking deer tracks. Note the potato chip can serving as a backpack.

After five decades, Jim is still fighting to complete the Florida National Scenic Trail. With 300 miles still needed to complete his mission, we need your help to Close The Gaps. Start by signing the petition, making a donation or using the hashtag #closethegaps on your social media pages.