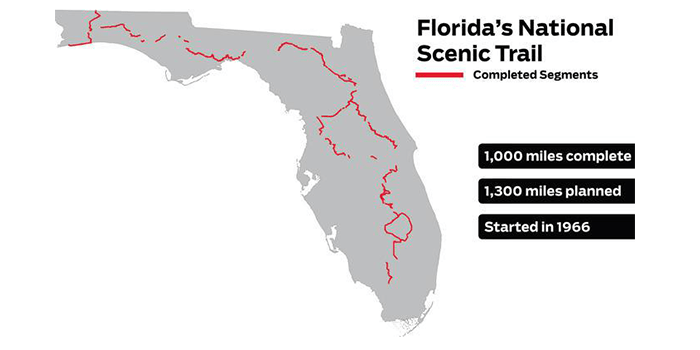 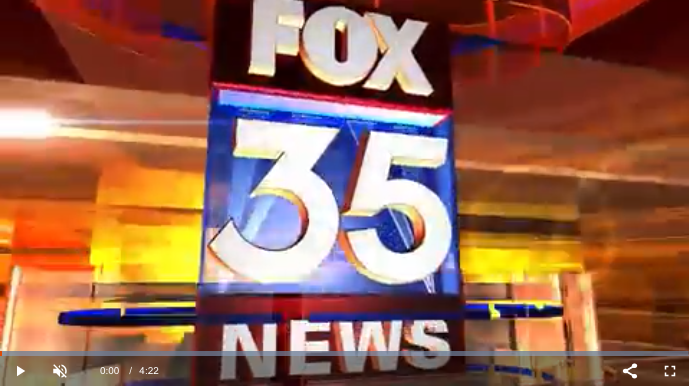 Carving out the Florida National Scenic Trail began in 1966, and now the hiking path from the Everglades to the western Panhandle visits springs, manatees, wetlands, alligators, white beach, turquoise ocean and bird life not seen in more famous wilderness walks.

But the 1,300-mile adventure also has 300 miles of gaps, where hikers are now routed away from nature to trek along highways. Those gaps are going to be harder to complete than the 1,000 miles blazed so far.

That’s according to its builders, who fear Florida’s growth, already at 20 million residents and 100 million visitors annually, will claim wild spaces and make the trail impossible to finish.

Florida Trail Association starts a conference Thursday in DeLand. Members will commemorate the victories and heartbreaking losses that in 50 years produced enough handcrafted pathway to stroll from Orlando to New York City.

The 300 miles of unfinished business will inspire and intimidate.

“It’s grim,” said Jim Kern, who built the first section of what would be designated by Congress in 1983 as a national scenic trail.

Then a Miami real-estate broker and avid hiker, Kern has devoted himself to trails and outdoor recreation. He now faces a daunting challenge.

“I would like to create a mood in Florida, where people, whether they ever set foot on the Florida trail or not, they have an opinion that it would be very good for the state to have such a trail,” Kern said.

Kern started advocacy groups, Friends of the Florida Trail and Hiking Trails for America, to “close the gaps” and finally lift the trail into the league of other great ones, including the Appalachian and Pacific Crest trails.

He intends to energize trail politics.

“Hikers are not very political, unfortunately,” Kern said. “They are not confrontational. They just want to be left alone to hike.”

Carlos Schomaker, Florida Trail Association president, said as the state grows more crowded, the trail will be an essential escape for “everybody from hardcore backpackers to a family with kids.”

“It’s probably more important today than back when it started that this trail exists,” Schomaker said.

The Florida National Scenic Trail has been shaped less by political acumen and more by the earthy will of people who thrive outdoors.

Sandra Friend, a prolific writer of guides to Florida wild places, said the state trail does not adhere to terrain in the way of, for example, the Appalachian, Pacific Crest and Continental Divide trails.

“All of those have specific land forms to follow: tops of ridges, tops of mountains, divides between waters,” she said. “Florida doesn’t have that.”

“That’s why Florida’s trail began in fits and starts. It sprouted here and there,” said Friend, who will talk about trail history during the annual meeting and will lead a class Nov. 10 at Wekiwa Springs State Park on hiking the trail.

“As the Florida trail grew, it literally became a connect-the-dots kind of thing,” Friend said.
The trail splits into a section west of Orlando and into a section east of Orlando, where legendary Wiley Dykes Sr., a titan of trail wrangling, mapped and traversed the Econlockhatchee River wilderness.

Dykes, who died four years ago, also was instrumental in a section of the Florida National Scenic Trail that Seminole County later piggybacked onto with its popular Cross Seminole Trail.

According to the association, there is fountain of youth in building trails. The median age of crew members is in the 60s, far older than elsewhere in the nation.

“They fall in love with their sections of trail,” said Alex Stigliano, a Florida Trail Association program director.

Rachael Augspurg coordinates the chapter in Seminole and Orange counties. That means some paperwork and lots of wielding loppers, machetes, shovels, weed cutters, mowers and chainsaws.

“We get a great sense of satisfaction out of building and maintaining trails for public use,” said Augspurg, who is 78; her husband, Lou, is 85.

The trail is readily enjoyable in pieces.

Of many highlights are the Big Cypress National Preserve, the giant Lake Okeechobee’s soaring dike, prairies and longleaf pine forests. Near Orlando are the inky Econlockhatchee River and springs of the Ocala National Forest.

In North Florida is the bluff-lined Suwannee River, a ribbon of black swamp water bleeding into crystalline spring water. Farther on is Aucilla Sinks, where the Aucilla River repeatedly sinks into and rises out of the ground.

The trail ends at Gulf Islands National Seashore near Pensacola.

Some trail fans want the entire experience in a single bound.

Every year, thousands attempt the 2,200 miles of the Appalachian Trail, taking about six months from spring to fall.

Florida’s trail can be done in about two months. About 50 “thru hikers” head out in winter, encountering amazement and agony particular to the Sunshine State.

There are three major gaps along the way: in Central Florida, along Florida’s Big Bend, and west of Tallahassee.

But the major challenge can run hip-deep.

“If you are hiking the entire Florida trail, you can’t be afraid of walking through water,” said Stigliano of the association.

Tom Kennedy, 64, said his feet were “trashed” by a hike last year. After endless wet miles, he grew to be at peace with slogging through water: “I learned to embrace the suck,” he said.

“I love that trail,” Kennedy said. “I’m planning to do it again.”