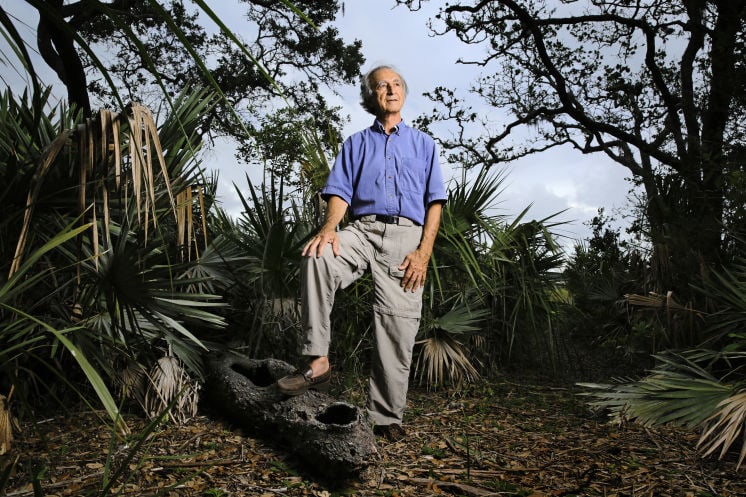 Look how far you can get just by putting one foot in front of the other.

Jim Kern has hiked trails all over the globe. He just got back from walking around Corsica. He’s clambered across the mountains in Nepal and trekked through the jungles of Borneo. He’s 83 and still pulling on his boots to wander the woods around his St. Augustine home whenever he can.

But the most important hike he ever made took place in 1966. He lived in Miami then, scraping by as a fledgling real estate broker. Kern had joined his family in North Carolina for a vacation and gone on a 40-mile hike on the Appalachian Trail. He returned home hankering to hike some more.

There was one very big problem: Florida didn’t have any hiking trails of its own.

So he set out to make one.

“The idea,” Kern says, “was to dramatize the need for a trail in Florida.”

His wife dropped him off at a spot on the Tamiami Trail known as the 40-Mile Bend. This was in March, so the temperature was in the 50s. He carried equipment that now seems antique: a canvas-frame backpack, a sleeping bag, a little Campmor camp stove and an aluminum cup.

By the end of 12 days, Kern had hiked to Highlands Hammock State Park, near Sebring in Central Florida — a distance of 170 miles.

With that hike, Kern launched the Florida National Scenic Trail, which now stretches more than 1,000 miles from the Big Cypress National Preserve in swampy South Florida to the Gulf Islands National Seashore in the farthest northwestern reach of the Panhandle.

Right now, that is what’s on Jim Kern’s mind — closing the gaps in the trail he started so long ago. One last thing to do before he can’t hike around any more.

And the Florida Legislature, he said, isn’t helping.

Kern wasn’t alone in blazing his trail in 1966.

For the first leg, he took along a Miami-Dade Community College professor named McGregor Smith Jr. They started off hiking along the levees the Army Corps of Engineers had built to hold back the Everglades, stopping frequently to snap photos, whistle at birds and swat away mosquitoes.

One night as they camped, they were surrounded by owls Kern had summoned with a mating call.

Smith’s feet soon sprouted blisters galore. Kern seemed unfazed. During one stop, Smith wrote, “while I plastered my feet with ointment, ‘Leather-Foot Jim’ kicked off his shoes, trotted down the oyster shell bank and dove into a murky looking canal.”

Smith bailed soon afterward, but other companions took up Kern’s cause. A troop of Boy Scout Explorers accompanied him for a weekend, and later he was joined by noted Florida reptile expert and showman Ross Allen.

Florida newspapers carried Smith’s account of Kern’s 1966 hike, which also mentioned that he had formed a group called the Florida Trail Association. Within six months, his group had attracted 70 dues-paying members. Now the members number more than 4,000.

“He’s a networker and quite tenacious — good qualities for soft-spoken environmental advocates to have,” said Sandra Friend, an avid hiker who wrote The Florida Trail Guide in 2015 and The Florida Trail: The Official Hiking Guide in 2004. “But most importantly, he promoted a dream that caught fire with other people. He didn’t have to carry the torch alone for very long.”

Kern set up more hikes through northern Florida, creating new legs for the trail he was proposing. He figured out his path so that it would go in stages through Ocala, Osceola and Apalachicola National Forests, touching on state parks as well.

At one point he went to federal Forest Service officials to tell them what he had in mind.

“They smirked,” Kern recalled. “They thought, ‘Who’s going to hike in Florida?’ ”

Hiking was for mountain terrain, not for Florida’s flat and swampy landscape.

They didn’t object, though — but they did tell Kern he was on his own.

But by then the word about Kern’s project had reached an ex-Green Beret and onetime Eagle Scout from Tampa named Fred Mulholland, who decided to lend a hand.

Mulholland, a GTE project manager and a dedicated backpacker, had been building things with wood since he was 8. He organized a crew of volunteers that included family members and Boy Scouts.

Over a series of weekends he led them in building an actual 26-mile footpath, complete with wooden bridges, along the route through Ocala National Forest that Kern had mapped out.

“Now we were up and running,” Kern said. “After Fred finished, we publicized it, and people began to show up and ask, ‘Where’s the trail?’ ”

The Forest Service officials who had scoffed “had egg on their faces,” Kern said, chuckling.

They also made him change the route.

“That was painful,” Kern said. The whole thing had to be redone.

Today, although the federal Forest Service manages the trail, “there’s a huge group of volunteers who do much of the maintenance — they do 99 percent of it,” Rains said. “The Florida Trail is probably one of the biggest volunteer success stories in the state.”

But Kern and his volunteers haven’t been able to stitch the whole thing together.

At 83, Kern isn’t leaping into any gator-infested canals these days. He’s had hip replacement surgery and other medical woes. When he walks around through the woods near his home, he limps a bit.

He has a lot of accomplishments he can look back on with pride. He started the American Hiking Association and served as its first president. He started an organization to help inner-city kids visit the wilderness. He started American Hiker magazine and published a coffee table book with his nature photography.

But he’s not spending his remaining years looking behind him. Instead, he’s facing forward, putting one foot in front of the other, pushing to complete his first big project, the Florida Trail:

“We’re coming to the government at a point where far more of the trail has been completed by volunteers than by anyone else, and we’re saying, ‘If you want this trail to be around for posterity, you need to do something — now.’ ”

Buying the land that’s needed won’t be cheap. Kern estimates the price at $200 million, or “about the cost of two large interstate interchanges.”

And he knows it’s a bad time to be seeking federal funding, given the current White House drive to slash spending for all the environment-related agencies.

Florida is supposed to be able to help. The state had a politically popular land-buying program called Florida Forever that acquired millions of acres of environmentally sensitive land for its award-winning state parks and state forests.

But in recent years, legislators have repeatedly stripped money out of the program and spent it on other purposes. So environmental advocates came up with Amendment 1, a constitutional amendment requiring them to fund Florida Forever. The measure passed in 2014 with the support of 75 percent of the voters.

Yet legislators have yet to change their ways. In this year’s budget, they put down zero for Florida Forever.

“If there was any money in Florida Forever, that would have helped,” Kern said.

Legislative leaders, as they have done repeatedly in the past, promised to come up with money for the program next year.

Kern isn’t sure how long the trail can wait, though. He doesn’t know how long he can wait, either.

Ask if he expects to live long enough to see all 1,300 miles of trail connected, and Kern gave an answer that’s the equivalent of a shrug: “I don’t know. I would love to.”

He paused, then added “Of course, I can only state a preference.”