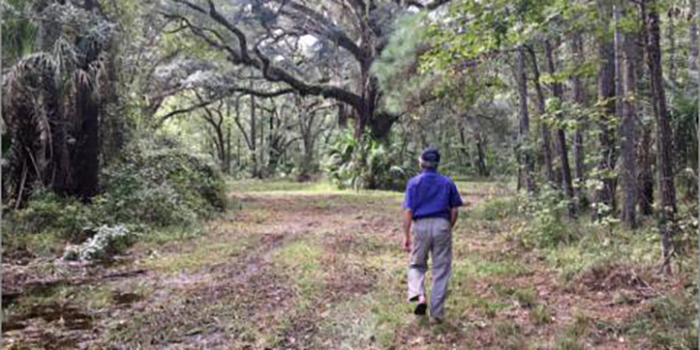 He laced up his hiking shoes — the right shoe with an extra 1¼ inches in the sole to compensate for a hip replacement that left one leg shorter than the other — and started walking through a floodplain forest full of towering cypress, toward a section of the Florida National Scenic Trail in the heart of Rice Creek Swamp.

“Now every time I buy a pair of shoes it’s a big deal,” he said. “I have to take them to a shoe repair guy and spend another 45 bucks.”

As we walked toward the Florida Trail — talking about how Kern founded the footpath 50 years ago — he veered slightly to his left, allowing me to move to his right side and continue the conversation.

“I’m deaf in my left ear,” he said, smiling and adding: “With my family, we all fall in line like this.”

Details like this — the modified right shoe, the hearing loss in the left ear, the knowledge that he would be starting cancer treatment a few hours after this hike — were reminders that he isn’t 32 anymore.

But looking at him — walking with him — you never would guess that he’s 82.

If ever there were an advertisement for the benefits of walking, it was the man leading me down the Florida Trail, recalling the hike he took in the spring of 1966.

A few years earlier he had hiked part of the Appalachian Trail with his brother. It was, he says, a miserable experience. And yet that experience stuck with him and led him to dream about a similar trail in Florida, stretching from South Florida to the Panhandle.

To draw attention to the idea, he hiked about 150 miles through the center of the state, founded the Florida Trail Association and, with the help of others, gradually began creating what exists today.

The Florida Trail is 1,000 miles of trails from Big Cypress National Preserve in South Florida to Gulf Islands National Seashore in the Panhandle. But it’s full of gaps, about 300 miles of them. Kern’s latest mission is to change that.

So shortly after I finished my little walk across Jacksonville, I arranged to meet Kern at his house in St. Augustine and head toward Palatka for a walk on the Florida Trail.

It was October, the week after Hurricane Matthew. And while there were reminders of the storm — small branches on the path, a few large trees down in the woods, even one across a wooden boardwalk — the most noticeable change was the air. It was a little cooler and drier.

An avid birder and nature photographer, Kern walked with a pair of binoculars, quipping before we started the hike that we were headed into “ivory-billed woodpecker country.” (The joke was lost on me until he reminded me of the frenzy a few years ago when people claimed a sighting of the large woodpecker, which generally still is believed to be extinct.)

We did not see an ivory-billed woodpecker. But we did see a memorable piece of the Florida Trail — with wooden bridge after wooden bridge leading over the dark water of the swamp, near the clear water of Rice Creek, through slash pines and cypress knees, beneath the canopy of cypress trees.

At one point, we took a slight detour, a boardwalk leading to a view of one of the 10 largest cypress trees in Florida. In 2007, it was measured as 107 feet tall, with a circumference of 24 feet, 9 inches.

As we stood there looking at it, a barred owl hooted in the distance.

“Isn’t this beautiful?” Kern said as we continued on the trail.

While he’s understandably proud of his role in the trail, in one of his books — “Trail Reflections: 50 Years of Hiking and Backpacking” — he says it’s “less about ‘me’ and more about ‘us.’”

“You start with an idea,” he said as we walked. “Ideas often spring from one person. But after that, if something’s going to happen, you need lots of people.”

He mentioned the thousands of volunteers who are constantly maintaining the trail — and people like Sandra Friend, who has become one of the trail’s greatest advocates, creating a valuable resource for anyone wanting to explore it: floridahikes.com.

I asked him about 1966, the reaction to his idea for a Florida Trail. He recalled getting an enthusiastic response from outdoors enthusiasts all over the state — people happy to pay the $1 membership dues to join this new association and be a part of the dream — but a lukewarm response from others.

“We consulted with rangers,” he said. “They were so blasé. I think they thought the idea of a trail through Florida heat and mosquitoes was ridiculous. From the beginning, I saw this as a winter foot trail.”

He points out that one of America’s most famous footpaths — the John Muir Trail in California — has a relatively small optimal hiking window, maybe 70 to 80 days, in late summer and early fall.

“To say we have a winter trail, I’m perfectly comfortable with that,” he said.

But he believes the trail has a larger window — as illustrated quite well by the fall day we hiked — and the potential to become something much grander than what it already is.

“The Florida Trail has significance if it’s continuous,” he said. “If we were completed like the Appalachian Trail, we could promote this and people would come. Not just from Michigan and New York and other places up north. They’d come from Asia and Europe.”

As we were circling back to the car, crossing one of the wooden bridges, there was a thunderous crash behind us.

We both spun around, and it was quiet again. Everything behind us looked exactly as it had moments earlier. No ripples in the water. No dust rising from dry land. But somewhere a tree had fallen in the woods.

He said that he believes there are “powerful parts of us” that are drawn to nature — and that nothing is more natural than walking.

In “Trail Reflections,” Kern begins by writing about this.

“What is the exercise we were born to perform? It is surely walking. Not swimming. Not hitting a ball with a bat. Not mountain climbing. But walking with an object in our hands. A spear in the dawn of hominids; a fardel held on our back a thousand years ago; a pair of trekking poles today; but still walking.”

In the last 50 years, few people in Florida have walked more miles than Kern. He has been all over the world. But more significant than any personal accomplishment is how he has spent the last 50 years helping to promote walking for others.

He co-founded the American Hiking Association. He was director of “Hike-A-Nation,” a 4,000-mile transcontinental trek in the 1980s to promote more and better trails. He founded Big City Mountainers, a program that has taken thousands of teens out of urban environments and into the wilderness. And, most recently, founded Hiking Trails for America and the Friends of Florida Trail, organizations striving to close the gaps in our national scenic trails and finish what he started in 1966.

Fifty years after he went for a hike through wild Florida, he’s still walking, still dreaming of an uninterrupted trail stretching from South Florida to the Panhandle.